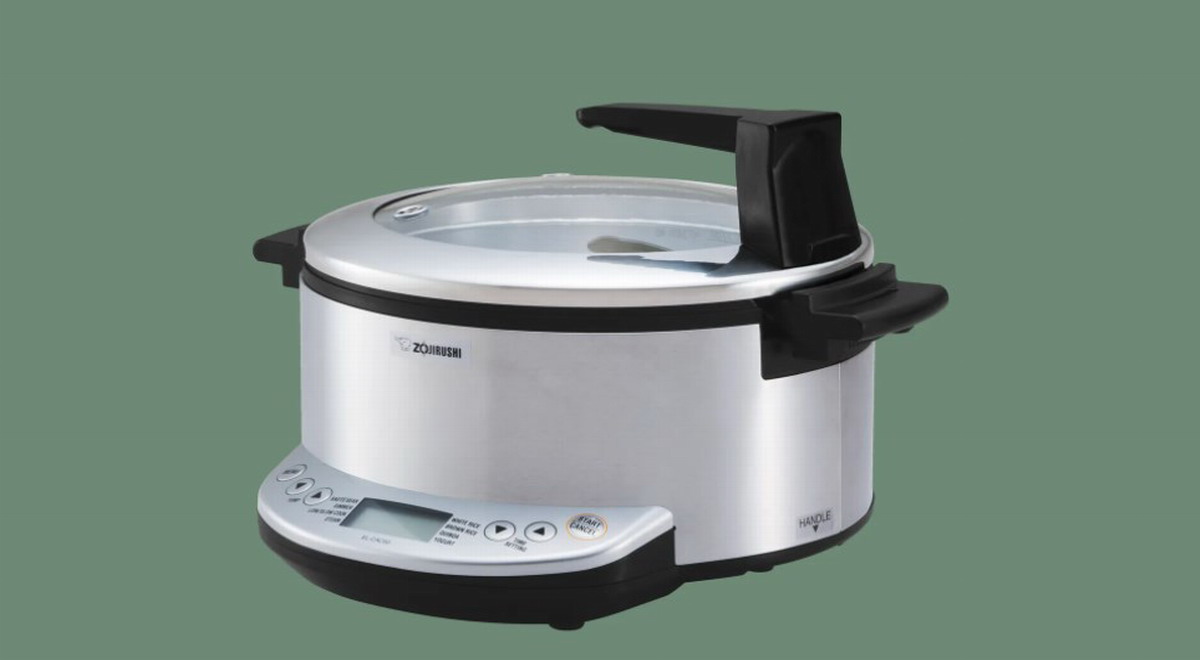 WIRED
A complete reimagining of the look and function of a slow cooker. The Zojirushi has a wide and sturdy metal cooking pot and high-heat settings so you can sear right inside it. As a multicooker, it can also make rice, yogurt, and even function as a steamer. It’s also a great reminder that pressure cookers aren’t always the most convenient way to cook dinner.
TIRED
It’s pricey, costing a few times as much as more traditional and top-rated slow cookers. MSRP is $320, though Amazon is selling it for less than $250.

THE FIRST TIME I saw Zojirushi’s new slow cooker, I thought “Damn, that’s weird-looking.” In a category famous for being Crock-Pot quaint or borderline ugly, this unit stood out like a UFO. In fact, it looked a bit like someone squashed an Instant Pot, stretched it wide, then clamped it shut with a fat-handled porthole.

The six-quart, 1,350-watt Zojirushi Multicooker EL-CAC60XZ feels like it was designed by someone well-versed in slow-cooker recipes and theory who’d somehow never seen a slow cooker and started from scratch. Bucking current trends, that same someone wanted a high-end multicooker that wasn’t a pressure cooker.

It might just be easiest to say what the machine does. Where most slow cookers only have high and low settings, Zojirushi’s slow cooker comes with four impressive to-the-degree temperature presets. It also makes yogurt, it steams, it makes rice, it has two simmer settings, and it keeps food warm. Unlike most electric pressure cookers—also confusingly known as “multicookers”—and almost all dedicated slow cookers, this one can sear well. Not perfectly, but well. With searing options of 350 degrees Fahrenheit or a no-slouch 410, it’s a nice development, considering how important a good sear often is to slow-cooker fare.

Traditionally, slow-cooker recipes might have you sear something like a pork shoulder on the stove, using a cast-iron pan, to create the flavorful surface browning from what’s known as the Maillard reaction. Once seared, you’d transfer that shoulder to the Crock Pot, deglaze the pan with stock or wine (scraping up the tasty brown bits of “fond” attached to the bottom of the pan), and then transfer the reduced liquid over to the slow cooker. It’s a slow, kinda fussy process. But it builds flavor and makes the finished dish better.

I started testing the Zojirushi late one evening, making the recipe for dark stock from Hugh Acheson’s fantastic cookbook The Chef and The Slow Cooker. Dark stock is chicken broth that gets a boost of flavor from browning the chicken before adding the other ingredients, then letting it bubble away unattended for eight hours.

I took advantage of that time to get a full night’s sleep and awoke to some lovely, deep-flavored stock.

Since the chicken had browned up so impressively, I tried a little experiment. I picked up a thick ribeye at Bob’s Quality Meats, brought it home, set the pot to sear at 410 degrees Fahrenheit, and hit Start. Here, I noticed and appreciated that the Zojirushi screen says PREHEAT on the screen while it’s warming up, a clever bit of help that keeps you from putting food in the pot before it’s up to temp and potentially overcooking your protein.

When the Zojirushi beeped to let me know it was ready, I put in some cooking oil and butter, let that heat up, added the steak, and was greeted by a pleasant sizzling sound I’ve never heard coming from a multicooker. I let it rip and had an impressive sear on one side in less than five minutes. I flipped it, seared the other side, checked the internal temperature, and learned that it hadn’t even come up to rare yet, allowing me to pull the steak from the heat and let it coast to the finish line.

It wasn’t as perfect as a hot grill or a cast-iron pan on a powerful stovetop, but then again, there have been times when I’ve used those and done worse.

With dinner approaching, I pulled Acheson’s book out again, putting that dark stock and a bunch of red wine to good use to make coq au vin.

First, though, I had a race in the name of fairness. I’d taken good care of the whole chicken plus a few extra thighs, salting everything and setting it all on a rack in the fridge overnight to dry out the skin. In the morning, I cut the bird in half, patted everything dry, preheated a Dutch oven on my stove, and set the Zojirushi and my 6-quart Instant Pot to their highest settings. Since the half birds couldn’t fit in the too-narrow Instant Pot, I put the thighs in it, and the bird halves in the Zojirushi and the Dutch oven.

The Dutch oven did best by a long shot, putting a nice, dark sear down the length of the bird. The Zojirushi did nicely too, browning the bird in a reasonable amount of time, and the Instant Pot left me wanting a darker sear, just like electric pressure cookers almost always do. In fact, I’d come to realize that unlike the smaller, less versatile, and more expensive Vermicular, the Zojirushi was something akin to a smart Dutch oven.

(Here’s a photo of the results. From left to right: Dutch oven, Zojirushi, Instant Pot.)

From there, I deglazed the pans, returned everything to the Zojirushi, added wine, mushrooms, and the stock, set it to low and walked away. A few hours later, I returned to a fantastic dinner.

It was while making this recipe in particular that I got to know the Zojirushi’s lid, which I might refer to as strange but lovable.

Those aren’t words I typically use to describe kitchen products (let alone lids), but this one quite literally stands alone. Instead of attaching to the glass close to the center of the lid, the rather whopping handle attaches to one side of the rim, and angles up to the horizontal part that you grab. It looks clunky, but instead of forcing you to stand there with a hot, dripping lid in your hand while you look for somewhere to put it, you can stand it vertically, much like the way you can stand up an iron. Thanks to the slight angle it stands at and a wide metal rim a bit inside of the edge, the condensation collects in the rim, and you can just dump it back in the pot when you put the lid back on.

For my last test, chef Erling Wu Bower had recently suggested Paul Bertolli’s Cooking by Hand, and I decided to make Bertolli’s sugo—which uses a medley of flavorful meats in a recipe designed to build flavors through a series of slow brownings and reductions. It’s a sort of concentration of flavor that makes for one hell of a sauce. What I liked most was the controlled temperature of 350 degrees Fahrenheit, which was perfect for long, slow browning that doesn’t need much babysitting.

After the browning, a few hours of low-temp slow cooking with wine and stock brought the meat up to the fall-apart tender phase, and I removed it to bubble the sauce down. Here, a weakness was exposed: That transition to high heat took a while. “Then again,” I thought, “you can’t boil anything down quickly in a slow cooker.”

What my time with the Zojirushi really reminded me of was how the battle between slow cookers and electric pressure cookers really shouldn’t be a battle. It’s certainly great to be able to blaze through dinner prep and have super-fast pressure cooker dinner from your Zavor or Instant Pot, but sometimes it’s easier to start something just before you go to bed and let it cook overnight or bubble away while you’re at work. Cooking with a pressure cooker is quick but quite hands on; slow cookers invite you to enjoy what you’re doing and even chill a little. Yet if the folks at Zojirushi ever figure out a way to make a pressure-cooker version of this (and, say, had it use induction heat), we’d be closing in on a perfect countertop appliance.

Still, with its smart reimagining, the Zojirushi has done an impressive job of expanding the range of what of what a slow cooker can do and the way we think about cooking.