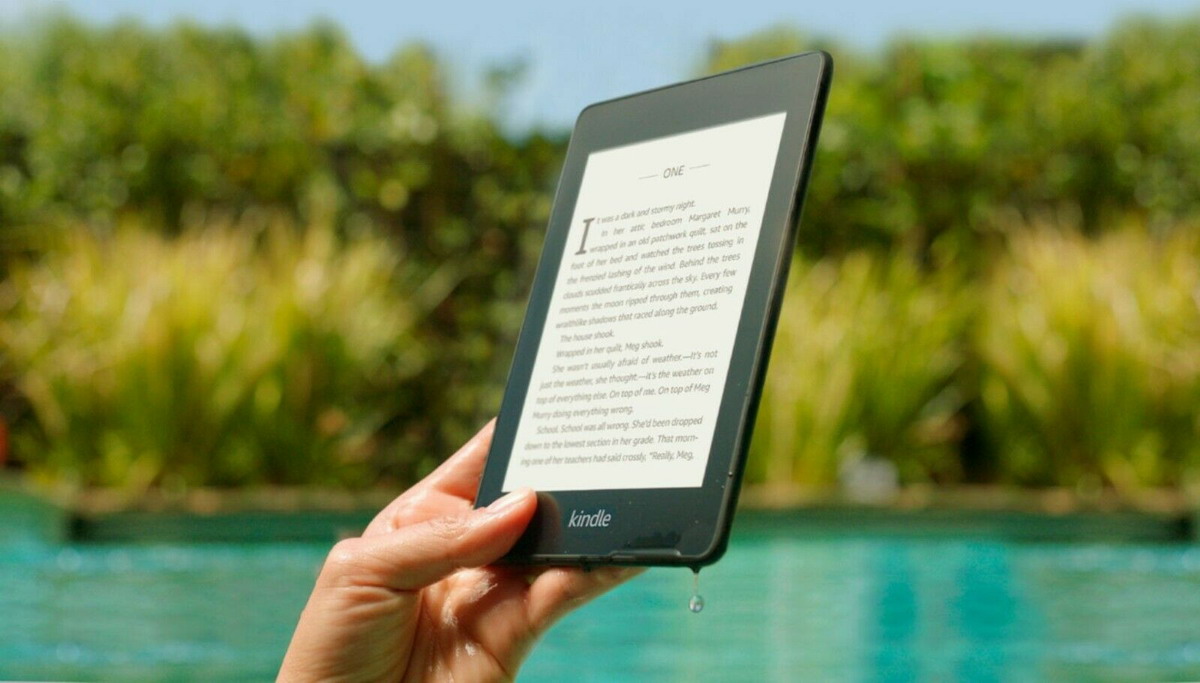 KINDLES ARE FANTASTIC little devices, but I was staunchly against them until recently. “How could you give up real books?” I screamed into the void. Then I tried the Oasis, and suddenly I was hooked. After reading with the new Paperwhite Signature Edition, I can confidently confirm that Amazon’s latest update to their beloved ereader is still great.

Nothing compares to the feel of flipping through physical pages, but I’ve spent a lot of money on books. Not all of them were good. They sit, half-read, gathering dust on a bookshelf and getting moved from apartment to apartment. It’s nice to be able to spend less on ebooks or check them out for free from the library without leaving my house.

The Paperwhite has always been the midlevel upgrade in the Kindle family—better than the basic Kindle, but not as feature-packed as the pricey Oasis. With its first update since 2018, it has turned into three models of its own: the standard Paperwhite ($140), the Signature Edition ($190), and a kids version ($160). I tested the Signature Edition here, but I included information on how all three compare. Prices vary depending on whether or not you have ads, so read the Amazon page closely before checking out.

The screen on the 2021 Paperwhite is larger, at 6.8 inches over 2018’s 6 inches. The bezels are also smaller, less than half an inch from the top and sides. The screen gets more room overall, and the whole thing looks a little more sophisticated. Compared to the Oasis, the Paperwhite is taller, and because it doesn’t have the page-turn buttons, it’s not as wide, so it’s easy to palm for one-handed reading. The matte backing helps to prevent slippage, too. (The Oasis still has a slightly larger, 7-inch screen.)

All three of the new Paperwhites get adjustable warm lighting—it gets super orange at its brightest—and brighter screens overall (10 percent brighter, according to Amazon). Thankfully, e-ink screens don’t hurt your eyes the way blue light from your phone does. Side by side, it’s not quite as bright as the Oasis, but it was still easy to read, even outside. It also now has dark mode, if you prefer that.

Only the Signature Edition has the ability to auto-adjust brightness to the lighting around you, so you can read outside without tinkering with settings every time the sun comes out from behind the clouds. At this point, auto-adjust should come standard on all screens without having to pay more for it.

The Paperwhites get faster page-turn rates, which is noticeable and appreciated. There’s even an animation you can turn on that gives the slight effect of a real page turning. I thought I’d hate it, but I didn’t. However, there’s still an infuriating lag and some screen blinks when you scroll through menus. There’s also a delay between pressing a button and it registering. I hoped by now that kind of lag wouldn’t exist, but it’s not a dealbreaker. I just hope it gets addressed in a future update.

The major upgrades that the Paperwhite gets are power-related. The Signature Edition now has wireless charging capabilities. If you already have a Qi charging pad, it should work, but Amazon lists those that do not. It also has more storage than the base model, with 32 gigabytes instead of 8 gigabytes.  That’s a significant jump, especially if you read audiobooks. It’s worth noting, though, that you can delete books off the Kindle and still access them in your Amazon account.

Battery life has improved, and it should now last up to 10 weeks give or take depending on how much you read. This means you can commute without having to plug it in every night or take it on a vacation without worrying about it dying just as you get to the good part. I haven’t had the Paperwhite long enough to test the 10-week claim, but even reading on full brightness didn’t drain it in a day, the way reading on my iPhone does. That’s the beauty of a one-trick device.

When it does need some juice, it should happen faster, thanks to its new USB-C charging port—a lot of your devices probably already use this port. It comes with a cable, but not the brick that you plug into the wall. Amazon’s official 9W charger should charge it from zero to 100 in 2.5 hours, although of course there are much faster bricks out there.

All three are rated IPX8, which means that it can be submerged in water safely. The old Paperwhite already had this rating, but it’s new to the kids Kindle. If you’ve spent any time around children, you know it’s a nice feature so they can’t accidentally ruin it. Like the older children’s model, if you purchase the kids Paperwhite, you’ll get a cover, a two-year warranty, and one year of Amazon Kids+, which is Amazon’s kid-friendly content library with parental controls.

We wrote about the new Kindle interface when the Paperwhites were announced. All Kindles will get this update eventually, if they haven’t already.

When you turn on a brand new Kindle, you can now use the Kindle app on your phone to set it up. It’s just faster and easier to type on a phone, so it should cut down a couple of minutes. While you’re reading, a pull-down menu offers quick access for brightness and warmth, dark mode, airplane mode, Bluetooth, and sync, plus a button to take you to all settings.

When you aren’t in a book, there’s a new navigator at the bottom of the screen to switch between home—where you’ll find a slew of recommendations based on what you’ve been reading and what’s popular on Kindle Unlimited—and your library, which is a much nicer, and less distracting, catalog of everything you have. A small icon of the book you’re currently reading appears between home and library, for quickly jumping back in.

It’s also easy to access Kindle’s helpful features that have been around for a while, like X-Ray, which helps you keep track of characters. While reading Nothin But a Good Time, I was able to pull up X-Ray when I didn’t remember what band each musician was in. You can browse all mentions or quickly jump right back to where you were. Unfortunately, not all books have this option.

The updates to these Paperwhites are solid improvements, but not life-changing. If you’re happy with the Kindle you have, you don’t need one of these new ones. But I do think that the upgrades—a bigger screen, better lighting, much better battery life and storage—are worth it over the base Kindle. You can leave the Oasis be. I like the physical page-turn buttons, but not enough to spend $80 more for it.