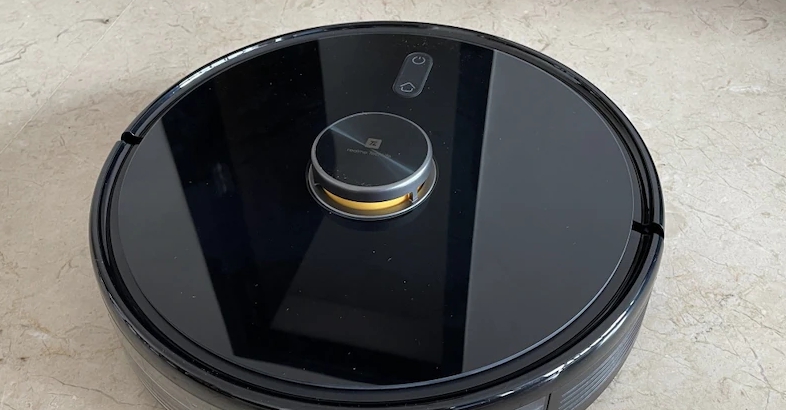 Xiaomi and Realme are rivals not only in the smartphone segment, but also in various other product categories that the two companies are a part of. Today, this covers audio products, televisions, streaming devices, tablets, laptops, wearables, and the smart home segment, with Realme usually entering the segment a little bit later, and almost always matching the pricing and feature set of the equivalent products from its biggest competitor. The rivalry has now extended to robot vacuum cleaners as well, giving Realme a much needed foothold in this emerging segment.

Realme’s first robot vacuum cleaner isn’t just a vacuum cleaner; it’s also capable of wet mopping, which can be done simultaneously along with vacuuming. The device has two sweeping brushes at the front, the main brush in the vacuum zone at the bottom, and space at the back for one of the two fittings – the vacuum dustbin or a combination attachment that has a water tank, mop cloth, and a smaller vacuum dustbin. These attachments can be removed and fixed in place easily, when the robot is on standby.

The robot is disc-shaped like most cleaning robots available right now, and has a raised module at the top for the laser navigation system. The front of the robot has a flexible bumper, which absorbs impact when the robot bumps into walls, furniture, and loose objects on the floor.

There are two buttons at the top; Power and Home. These can be used to control the core functions of the Realme TechLife Robot Vacuum Cleaner even without needing to set up the app, but the full functionality of the device can only be accessed through the Realme Link app. The device is Wi-Fi enabled, and will need to be connected to your home Wi-Fi to enable app-based controls.

The Realme TechLife Robot Vacuum Cleaner uses laser navigation, which makes for accurate movement, organised cleaning paths, and the ability to work even in the dark. The robot and app can store maps, which you can use to set the order in which rooms are cleaned, or have the robot clean only individual rooms, among other functions.

Mapping was generally accurate, and navigation was acceptable for the most part, with the Realme TechLife Robot Vacuum Cleaner moving in efficient paths, avoiding most obstacles, and working quickly. You can select a Y-shaped mopping path instead of the default S-shaped path, which takes a bit longer but cleans more effectively by covering each area with two sweeps instead of one.