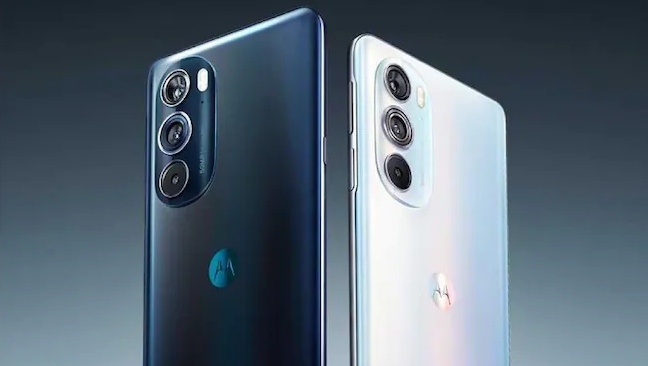 Motorola Moto Edge X30 is set to launch on December 9, and the company has been teasing the design and specifications of the smartphone over the past few days. The company has now shared official images of the smartphone, offering a view at its rear design. The company’s upcoming flagship smartphone is likely to be the first smartphone powered by the new Snapdragon 8 Gen 1 SoC. It will be launched in two colours and will feature a vertically aligned triple rear camera setup, according to the images shared by the company.

On the back, Moto Edge X30 sports a triple camera setup, marked by a vertical layout of sensors. According to previous reports, Moto Edge X30 is set to launch with a 50-megapixel primary sensor, a 50-megapixel ultrawide sensor, and a 2-megapixel depth sensor. The smartphone is tipped to be the first Android handset to feature the latest Snapdragon 8 Gen 1 SoC under the hood, ahead of the upcoming Xiaomi 12 series.

According to previous reports, Moto Edge X30 could also feature a 6.7-inch OLED display with a 144Hz refresh rate. The smartphone could also be launched with Android 12 out-of-the-box, making it one of the first smartphones aside from the Pixel 6 series to launch with the latest Android operating system. It is tipped to feature up to 16GB of RAM with up to 512GB of storage. It could be powered by a 5,000mAh battery, with support for 68W fast charging.