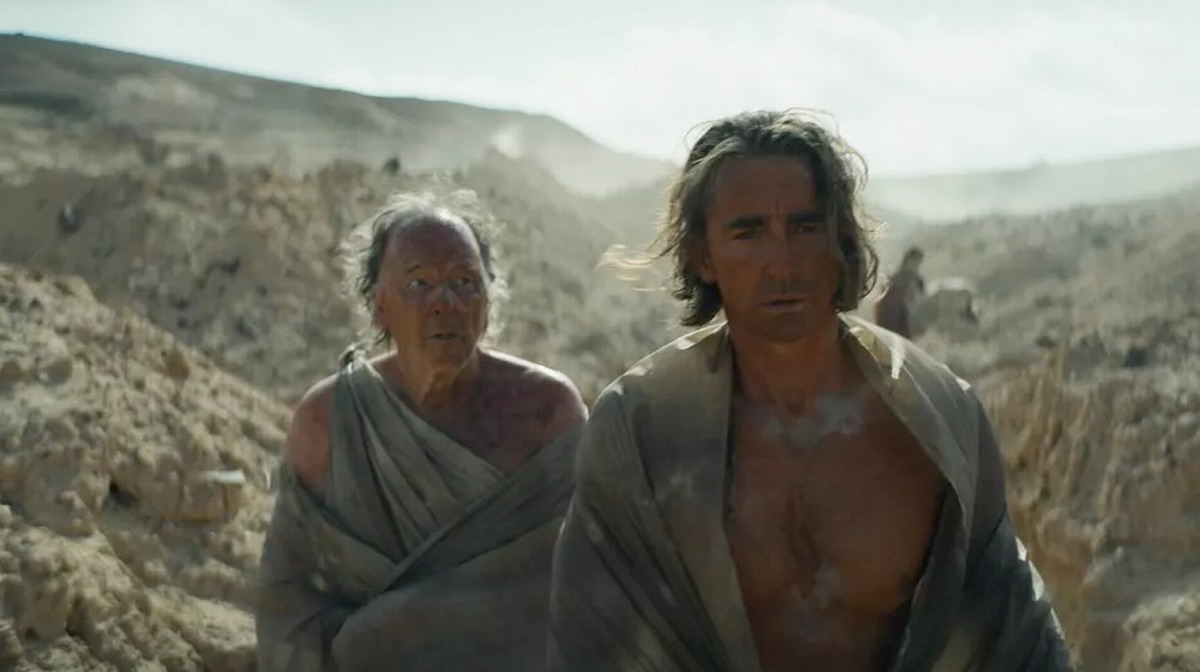 Major spoilers follow for Foundation episodes 1 to 8. Turn back now if you’re not caught up.

It’s quite fitting that Isaac Asimov’s Foundation book series was, according to showrunner David S. Goyer, a “phenomenal influence” on Star Wars.

Why? Well, based on one particular line in Yoda’s famous monologue about how fear leads to the Dark Side – “anger leads to hate” – it seems that Star Wars is now the one that’s influencing Foundation.

Or, at least, that’s the case in the latest entry in Apple’s TV adaptation of Asimov’s works. Episode 8, aka The Missing Piece, is one where multiple characters are left infuriated, and feeling betrayed, by someone close to them. And, if we’ve learned anything from Foundation so far, it’s that unpopular decisions can come back to bite its main characters down the line.

Perhaps unsurprisingly, the first of those betrayals concerns Brother Day. After announcing his intention to walk the Great Spiral – a 170km trek to a mystical cave known as the Mother’s Womb – in episode 7, Day begins his pilgrimage. And clearly, it’s more arduous than the Empire’s egotistical ruler predicted.

Without his shield-like aura or nanobots to protect him, or food and water to replenish his energy levels, the journey takes its toll on Day. It’s fascinating to see Day reduced to an ordinary man struggling to survive, even if it’s in extreme circumstances. He’s clearly out of his comfort zone and, at various points, you do wonder if his stubborn and reckless decision to walk the Great Spiral is a worthwhile endeavour. Especially if it costs his life.

That is until he meets an older, wiser pilgrim undertaking the same journey. Bonding over the trek, the duo’s conversation humanizes Day in a way that we haven’t seen before. When he falls later in the episode, due to exhaustion, it’s the older pilgrim who helps Day back to his feet. It’s a poignant moment – Day is visibly moved by the aid he receives – and you wonder if this back-breaking journey will actually be an epiphanous moment in Day’s character arc.

Such a scenario looks more likely, too, when Day’s companion falls to his knees some time later. Day, remembering how he was helped earlier, tries to encourage his partner to stand up again. However, the pilgrimage’s rules state that anyone who falls on both knees must end their journey where they drop. Unexpectedly, Day’s companion declines his offer, succumbs to his exhaustion and dies. It’s an emotional moment and one that, again, has a profound effect on Day.

Or so we’re led to believe. Eventually, Day makes it to the Mother’s Womb, but not before he smashes the skull of a dead pilgrim outside of the cave. It seems like a strange thing to do, but it symbolizes that Day and Cleon’s other clones have defeated death. Given that the original Cleon may live forever through his clones, it’s a clever piece of visual representation on the part of Foundation’s showrunners.

But we digress. Inside the cave, pilgrims are believed to be shown a deeply personal vision from the Mother and, on their return to Maiden’s main settlement, its elders interpret what each traveller saw. Day makes his way back to the conclave and reveals what his vision was: a three-petaled flower, known as a birthroot, which is believed to be sacred among Maiden’s population.

But, as it transpires, that’s a lie. Day doesn’t have a vision inside the cave – he spotted a birthroot flower on Eto Demerzel’s desk, in episode 6, on the jump-ship before it landed on Maiden. Using the flower as a crux for his ‘vision’, Day tricks Maiden’s Zephyrs into believing he is a holy person with a soul, which was his plan all along. As a result, the Zephyrs crown Galat as Maiden’s new leader instead of Halima, ensuring that Day’s wish from episode 4 comes true. It seems, then, that Day’s fellow pilgrim didn’t have as big an impact on him as we thought. As the saying goes, a leopard can’t change its spots – and that is evidently true of Day.

However, there are some who see through Day’s lies, including Demerzel. After she’s instructed by Day to murder Halima – as the last living intelligent robot in the universe, she’s been reprogrammed to obey the Empire’s rulers – Demerzel suggests that she knows Day lied to Maiden’s Zephyr council. Clearly upset at Day’s deception and betrayal of her trust, it’s ironic that Demerzel ends up showing more emotion than her more human counterpart. It appears that Day’s right-hand has lost faith in him, and it will be intriguing to see how their dynamic shifts moving forward.

Demerzel isn’t the only person who feels betrayed in The Missing Piece. Having learned that she can somewhat predict the future in episode 7, Gaal Dornick is told why the Raven is heading to Hari Seldon’s homeworld of Helicon: a second Foundation is to be established there.

Interestingly, this is one of the few occasions where Foundation lifts directly from Asimov’s source material – Hari creates two Foundations at opposite ends of the galaxy here, too. Apple’s Foundation has largely diverged from the story in Asimov’s novels thus far, so it’s pleasing that it’s retained this continuity from the books.

As Hari explains, it was always the plan to create two Foundations. The first, which was built on imperial charter, would bear the brunt of the Empire’s spying and draw fire from the Outer Reach’s other civilizations. Meanwhile, the second Foundation was developed in secret, but Hari refuses to explain its purpose.

Furious that Hari continues to keep her in the dark – and betrayed her trust, since she believes he considers her to be a means to an end – Gaal destroys the Raven’s heat shields to try to coerce him into letting her leave. Hari refuses, almost in a manner befitting HAL from 2001: A Space Odyssey, and the pair angrily trade verbal barbs.

Eventually, though, after Gaal pleads to chart her own path in life, Hari relents and allows her to head back to Synnax in the Raven’s stasis pod. It’s a pretty sad end to what could have been a complex but powerful friendship between the two, albeit Hari now only exists as a digital construct now due to his death in episode 2. Will the pair ever be reunited again? It’s unclear, but we wouldn’t bet on it.

Episode 8’s final betrayal is more telegraphed than its other two storylines, but it’s one born out of necessity rather than anything else.

With the Anacreons still hell-bent on using the Invictus to enact revenge on the Empire’s stronghold of Trantor, Salvor Hardin attempts to concoct another plan to try to escape their clutches.

After the group works together to take down one of the Invictus’ sentry drones, Salvor takes her chance. Opening the final security-locked door to the Invictus’ cockpit, Salvor spots a rifle in the next room. Grabbing it, she opens fire on the Anacreons and, in the ensuing chaos, drags fellow Foundation member Lewis Pirenne onto the ship’s main deck and locks the door behind them.

Given Salvor’s penchant for trying to escape on numerous occasions already, you’d think that the Anacreons would be wise to her tricks by now – so why do they keep letting her get away with it? It’s understandable that, from a suspense perspective, Foundation wants to maintain some semblance of tension in this particular storyline. But this plot point feels pretty forced, so let’s hope that the ‘Salvor escapes from the Anacreons’ story beat is done and dusted after episode 9.

Why wait until then? Because the Anacreons force their way into the cockpit, kill Lewis and try to stop Salvor from piloting the Invictus to Terminus.

If Salvor is successful, she would have a planet-killing weapon that may force the Outer Reach’s other planets, including Anacreon, to fall in line and leave Terminus alone. As it turns out, though, Salvor and the Anacreons fail to stop the Invictus from jumping to its next random location somewhere in the galaxy. That’s despite Hugo’s best efforts – yes, he’s still alive following his apparent death in episode 7 – to call in reinforcements from Thespis to aid Salvor, too. We’ll find out where the Invictus ends up next week.

As its title suggests, The Missing Piece is (hopefully) the final piece in Foundation season 1’s puzzle before two potentially explosive final episodes.

It’s a decent episode that fills in plenty of gaps in the narrative, but it feels a bit too long by the time the credits roll. That’s primarily down to its Invictus-based storyline, which is currently Foundation’s weakest narrative and almost feels like filler material at this point. Half of the content in this story arc could’ve been cut from episode 8 and it would have made for a tighter plot.

Still, Foundation episode 8 delivers plenty of compelling drama to keep viewers engaged. There are some cool call backs to Asimov’s source material, which show Apple’s adaptation hasn’t completely deviated from the books on which the series is based. And, given that Foundation has already been renewed for a second season, we’re likely to see more nods to the novels in the future.

However, Foundation season 1 needs to give us something genuinely fun and thrilling in its final two episodes. Providing us with a couple of big action set-pieces, unexpected character crossovers, or a merging of some of its story strands would go a long way to giving us something to look forward to in Foundation season 2. You’ve done the hard work in retaining our interest, Foundation – don’t throw it all away now.

New episodes of Foundation debut exclusively on Apple TV Plus every Friday.